If you have an affinity for trains you mustn't miss Eurospoor!

Model railway buffs should be getting ready for Europe's largest model railway event, EUROSPOOR, which takes place this year in the Jaarbeurs (trade fair centre) in Utrecht, the Netherlands in November 2020.

A surface area of 20,000 square meters will offer visitors the chance to view over 60 model railways belonging to clubs from the Netherlands as well as other countries, extensive model train collections, model-making demonstrations, stands of representatives and retailers, a model railway market of 1000 meter length where train-lovers offer their used trains, accesories and collectors' items for sale or exchange.

Eurospoor 2018: 26 year! An edition with emphasis on foreign layouts!

For 26 years, Leo and Chitra Hendriksen are the driving force behind the Eurospoor train. Started in a small hall in the local town of Zaandam it slowly grew to become an international event for hobbyists coming to the Jaarbeurs from far and wide. The name 'Eurospoor' for the event came almost by itself as the borders would open in 1993, making it easier for foreigners to cross national borders with goods and layouts without much formalities.

Now for the 26th time Model railway buffs should be getting ready for Europe's largest model railway event, EUROSPOOR, which takes place this year in the Jaarbeurs (trade fair centre) in Utrecht, the Netherlands on 9, 10 and 11 November 2018. A surface area of 20,000 square meters will offer visitors the chance to view over 60 model railways belonging to clubs from the Netherlands as well as other countries, extensive model train collections, working miniatures smaller than your little finger (Z-gauge) and also enormous specimens weighing many kilograms each (gauge 1), model-making demonstrations, stands of representatives and retailers, a model railway market of appr. 1000 meter length where train-lovers offer their used trains, accesories and collectors' items for sale or exchange.

This year we have many layouts from ouside the Netherlands, underneath we mention a few: 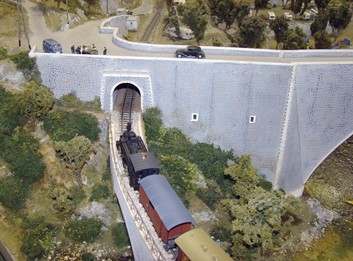 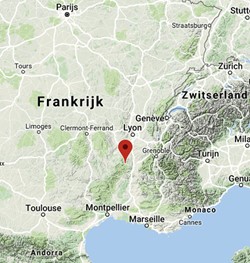 The railway of Vivarais, also called Mastrou or Train of the Ardèche, is a tourist gauge railway with a length of 33 kilometers. It runs from Lamastre to Saint-Jean-de-Muzols and winds through the gorges and green valley of the river Doux, a protected area with views that are not accessible by road. Whoever is on the platform of the first car can see the cabin and observ the work of the machinists. The service is provided by six Mallet steam locomotives (built 1902 and 1932), which are on the list of historical monuments and are all in the collection. The line was built for economic reasons in 1886. More than a thousand workers armed with shovels, pickaxes and dynamite built 20 kilometers of retaining walls, masonry viaducts and a tunnel only with the help of donkeys and manpower. On Eurospoor you can see this line in miniature. Club Grangeois comes from France and shows a large part of this spectacular railway line in H0m (1:87). We can admire the Caesar bridge, the Douce Plage camp site, the dam, the viaduct in the Troy bend, Mordane and its tunnel, the Etroits and many other beautiful landscapes.

"De Bimmelbahner" are the builders of a huge Sachsische modulair railway with a length of at least 25 meters. The single-track winds through a romantic model landscape with several stops. The route runs over small streams, through forests and along half-timbered houses. The rolling material on the track and the motifs used make it clear that the builders focused on the DDR and Epoch III (1949-1970). In that period steam was still being driven. An eye-catcher is the bridge across the valley, which is entirely self-built. But many other lovingly designed details also show the high quality of this Hoe (1:87) narrow gauge railway. 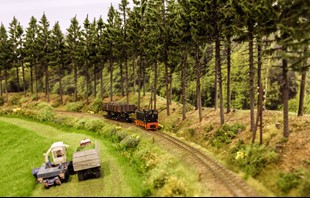 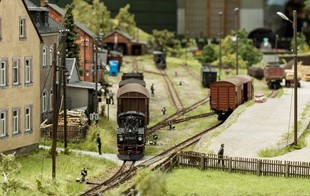 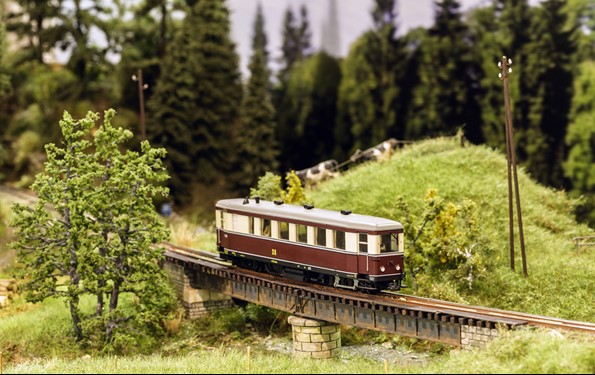 Lignite excavators are among the largest vehicles in the world. They are used to mining lignite and can extract up to 240,000 tons of coal every day. They are the largest and heaviest machines in the world. More than 200 meters long, almost 50 meters wide, almost 100 meters high and weighing more than 13,500 tons. With their enormous strength, they can dredge as much lignite every day as 40,000 employees and are therefore very profitable, despite their high purchase and operating costs. In scale 1: 120 the (East) German club Hoyerswerda shows you the machines and the digging and loading of the great example. The special signals and special vehicles have not been forgotten. 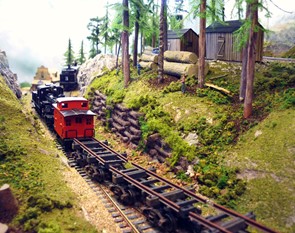 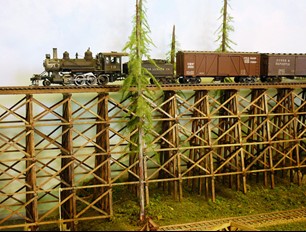 At the beginning of the last century there were countless forest and mining railways in the United States. These narrow-gauge railway lines consisted of self-built and highly varied material that, on often provisionally laid out rails, lumbered through the enormous forests with a train of freight wagons filled with logs behind them. A fascinating theme among model builders is the heavy labor carried out by man and machine in the vast forests, where trees are sawn down and steam locomotives bring the logs down, puffing and zigzagging. The builders of "Prospect Point" were inspired by the situation that took place in the hills near Montana in the late steam era. To get more depth this model track was built in L-shape (see picture). 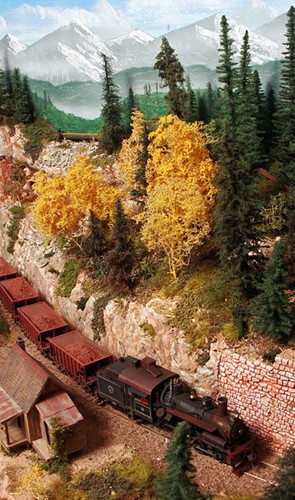 The S & G MN Co. is not a too reliable reflection of what actually took place in the twenties and thirties of the last century on Vancouver Island, on the west coast of Canada. In the mountains of this large island in those days, ore was found, ranging from silver to traces of gold. Not a lot of everything, but just enough for an obscure railway line in normal track from the mines to the coast, where it could be shipped for further processing. 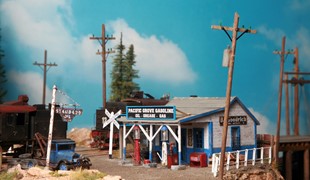 In the "Narrow Gauge & Short line Gazette", a model railroad magazine for lovers of narrow-gauge railway and short lines, I came across an article about the Lenora and Mount Sicker Railway in the July / August issue of 1984. So that's what it had to be. A railway line along the China Creek towards the harbor. As with many mountain railways, the track wars, where possible along natural roads, in curves through the mountain valleys. There are still many obstacles that make it necessary to build the necessary tunnels.

From the relatively moderate temperatures on the coast to deep into the mountains, where the snow can sometimes be several meters high, the locomotives must be able to withstand all possible conditions and obstacles along the way. The ore cars require many of the small locomotives on the steep slopes and in the sharp bends along the rivers. Therefore, use is made of so-called cardanically driven locomotives.

Their transmission is done by means of gears on the bogies, which gives a lot of grip, even in the bendss. Shay's, Heislers and Climaxes are in charge here. They are the off-road vehicles of the track. There is not much to be found from the former residents of Vancouver Island. But one characteristic thing is there. The Totem Pole! Many of these beautiful artefacts have been preserved today and can be found everywhere on the island. On the track too, a group of totem poles can be discovered with some searching. 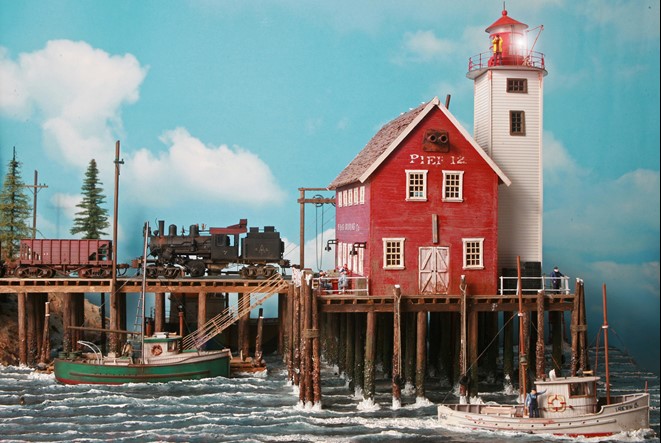 
Here you can see the diorama of Peter Seuren. He won the first prize two years ago. For the year 2018 25 participants have already registered. The task is then that the diorama must not be larger than A4 format. Simple and easy with the motto: "Not too big, not too small on an A4 sheet it must be built". The participants have almost completely free hand. The dioramas will be presented on Eurospoor2018 for 3 days. There will be an expert jury but also the visitors may bring in their vote. The award ceremony will be sunday afternoon.

The product has been added to your cart.